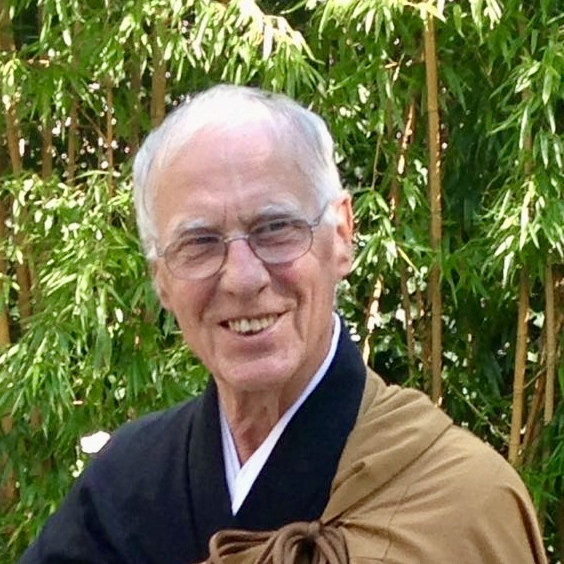 Dick Butsugen Verstegen sensei (1940) is a zen teacher and personal coach since 2003. He received in 2017 Dharma-transmission from his zenmaster Niko Tenko Tydeman roshi, who, on his turn, is a Dharma-successor of the American zenmaster Genpo Merzel roshi. Genpo is a disciple of the Japanese zenmaster Maezumi roshi who is the founder of the White Plum Lineage in the US. Verstegen is the founder of Zen Centre Nijmegen and the Kwan Yin Sangha. His zen training started in 1989. He attended classes and sesshins with various teachers. In 2013 he became disciple of the famous Amsterdam zenteacher Nico Tydeman (Niko Tenko roshi), who ordained him as zenmonk in 2016. In
June 2017 Tydeman made him one of his Dharma successsors by granting him Dharma transmission (shiho) and giving him the name Butsugen (Buddha eye) at that occasion. From 1961 to 2001 he was a journalist with various dailies and from 1980 he was chief editor at VNU Dagbladengroep (VNU Newspaper Group). On his retirement from journalism he wrote a book entitled Alleen maar nu (Only now, 2000), in which he put forty years of working as a reporter in a zen perspective. A few years later he wrote Zen-buddhism, a book that was published by Asoka in a revised edition under the title of Zen –de sprong naar nu (Zen – the leap to now, 2009). He was editor of the quarterlies Zen and Buddhism. He was a contributor to the buddhist quarterly Vorm & Leegte (Form and Emptiness later Buddha Magazine), in which he had a regular column for many years under the heading of Scherp van desnede (Cutting Edge). His third zen book, De tocht van het hart (Journey of the Heart, 2011) is a credo
that evolved from his own quest. In 2017 his collection of columns Zen is opendoen (Zen is opening up) was published. In 2021 appeared his latest book Oh ja, van kijken naar zien (Oh yeah, from looking to seeing).